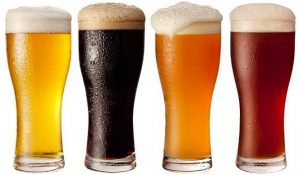 Types of Beer
While there are many types of beer, all beers can be categorized as either an ale or a lager. The big difference between the two is the type of yeast used during fermentation. An ale has yeast that ferments on the top (top fermenting), while a lager has a yeast that ferments at the bottom of the beer mixture (bottom fermenting).

Once you determine whether a beer is an ale or a lager, they can then be categorized by flavor, color and aroma of beer.

Create a custom menu under "Appearance => Menus" in your WordPress dashboard to display social icons in this widget.